This painting by Sandro Botticelli, the birth of Venus, painted between 1484 and 1486, is considered by many to be the masterpiece of Italian Renaissance painting.

The balance of its composition, the way the groups of characters are arranged, the position of the horizon line, are by no means due to chance.

What was the secret of Botticelli? How has he structured his work so that it appears to us to be colloquially balanced?

To try to answer these questions, we must dive into history, and understand the tools used at the time. 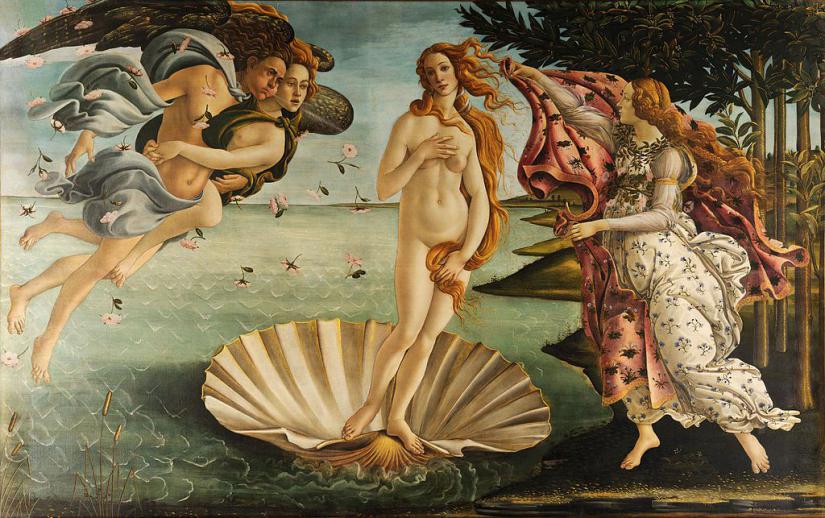 In order to explain this choice of measures, it is necessary to dive back into history, and in particular into the system of measures used at the time.

Before the advent of the metric system (1792), the measurements were modeled on the proportions of the human body: lenghts were measured in inches, feet and cubits.

Cathedral builders had developed a system of five measures which represented a true standard system to which all workers could refer to a building site: the hand, the palm, the span, the foot and the cubit.

If you take your own measurements and make the connection between these different measures, you will get an approaching result, but not accurate. The interest of the system developed by the Companions Builders was to impose on a work a set of measures common to all the workers of the site.

We know today that there is a constant relationship between these five measures. If you divide one of these measurements by the previous one (example: cubit / foot, or palm / hand), you get an irrational number close to 1.618.

If one of these measures is multiplied by this number, the next measurement is obtained. (Example: span X 1,618 = foot)

If we add the length of two adjacent measures, we obtain the third: hand + palm = span, or span + foot = cubit.

If this number was named in the XIXth century "Golden number", Luca Pacioli, whose mathematic treatise was illustrated by Leonardo da Vinci, had baptized it "the divine proportion". Euclid already spoke around 300 BC to "share a segment in extreme and average reason" to obtain a harmonious relationship between two lengths.

A chapter is devoted to the Golden number, or Golden ratio, at the end of this site.

Let us return to the dimensions of the Birth of Venus. Converted into measures of the time, the painting has a size of 5 x 8 feet, or 8 x 13 spans !

This specific format, in which the ratio between width and height is equal to 1.618, is called a "golden rectangle".

It was customary at the time to divide the height of a painting by 8, and to place the horizon line on the 3rd or 5th horizontal position. In this sequence of numbers (3, 5, 8, 13), called the "Fibonacci Suite", the ratio between a number and the number preceding it tends to 1.618, the famous Golden ratio. This ratio is identical to the one which governs the terms of the continuation of the measures used by the builders of medieval cathedrals: hand, palm, span, foot and cubit.

Any pictorial or architectural work of the time was "signifying", that is to say charged with divine symbols. Religion was then omnipresent. Sandro Botticelli was the student of Fra Filippo Lippi, monk painter of the first Renaissance. For Botticelli, using human proportions to structure his work was the result of a secret know-how, but also a reminder of sacred notions. The "divine proportion," of which Luca Pacioli, spoke at the same time, alluded to geometry, human proportions, and therefore divine creation.

We wanted to find the largest common divider between the width and height of the work (picture above). The result is, in the metric system of today, close to 21.3 cm, that is to say close to the measure of a span of the time. The span measures the spacing of the thumb and little finger, the hand spread.

A regular grid of squares calculated on this measure (which is perhaps the size of Boticelli's own span!) was superimposed on the famous painting. The red lines represent the division of the height and width of the painting by the famous Golden ratio.

Second observation: the red lines represent the structure of the painting: the precise position of the horizon line, the positioning of the different characters and the shell that gives birth to Venus.

Third observation: the lines of the grid and those obtained by the division of the external dimensions by the Golden ratio coincide perfectly!

Obviously, Sandro Botticelli, to give a structure to his work, used what the architect Le Corbusier called a "regulating lines" system based on the measurements of his time, i.e. on human proportions.

This system of proportions confers on this work an overall balance of the different volumes making up the picture and a natural harmony.

The image below shows the internal proportions of the painting compared proportionally to the main units of measurement used at the time of Boticelli; the span, the foot and the cubit. 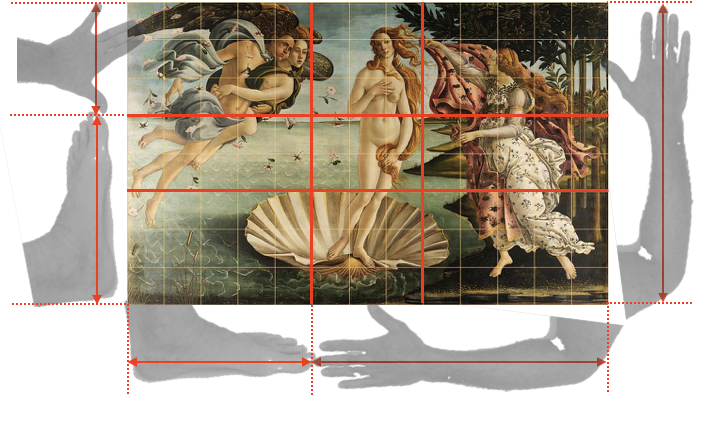 Watch the video below: it explains how a complex regulating lines gave rise to the structure of Botticelli's work. We will tell more about the tool used in this video below.